The palace of Ungern-Sternberg, at present, the residence of the Academy (Kohtu Street 6, built in 1865-1868, architect Martin Gropius)

Recovery from the Covid-19 crisis

The Estonian Academy of Sciences recommends that the economy be enlivened by investments into improving communication systems and radical restructuring of the energy sector.


The General Assembly of the Estonian Academy of Sciences held in Tallinn on 25th September 2019 re-elected Professor Tarmo Soomere as President of the Academy until 7th December 2024. 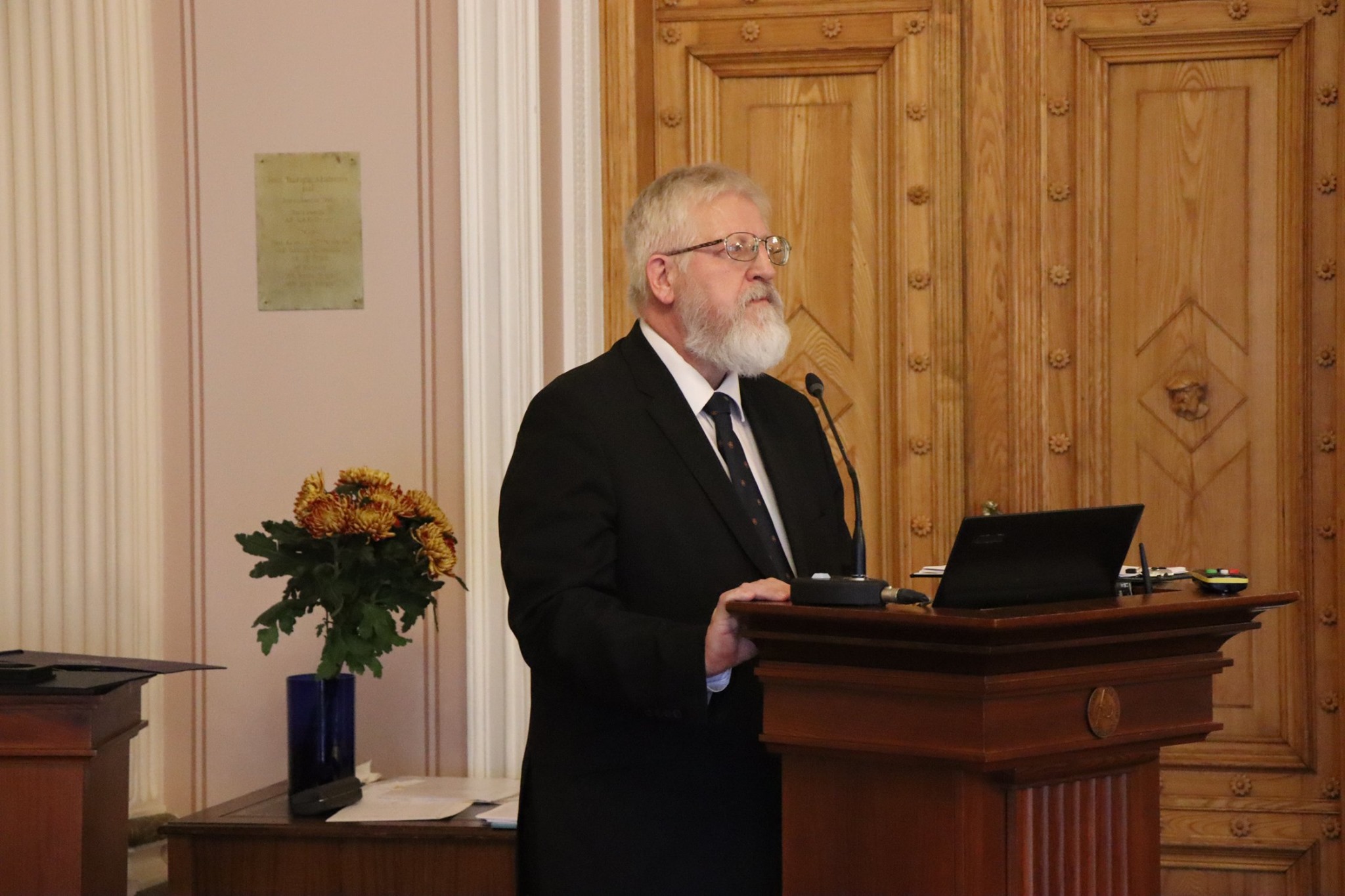 Before voting procedure a brief overview about the term of the Presidency in 2014-2019 and vision for 2020-2024 was delivered by President Tarmo Soomere.

The role of the Academy, said President, lies in consolidation of scientists and making their voice heard. The Academy is becoming as main science adviser to the State. Writing the Academy into the Coalition Agreement is a big achievement, said the President. He continued: ministries and other institutions of the Republic of Estonia are interested in scientific support provided by the Academy.

After the results of the election were announced, President said that the General Assembly today demonstrated revival of a strong belief that the Academy is needed. He noted that the Academy has to make a clear choice between the roles of lobbyist and science adviser. The one who makes lobby cannot be heard as adviser, said the president.

Speaking about future perspectives Professor Soomere stressed the need for continuity of the present course. Science advise could grow up, become adults, said the President. We have received signals from our Government and politicians that the Academy is already now performing the role of the Chief Scientist in Estonia.

More attention should be paid to the general education, said the President. It is essential to provide support to teachers and students. There is need to explain why one or another subject or topic in the curriculum is important. Creating interest towards these subjects is crucial. Achievements and discoveries of the Estonian scientists and researchers need to be taken more actively to the people.

A new media channel introducing Estonian science to Estonian people is needed. 2000 papers yearly published by the Estonian researchers could be interpreted into 200 articles targeted to a wider audience. 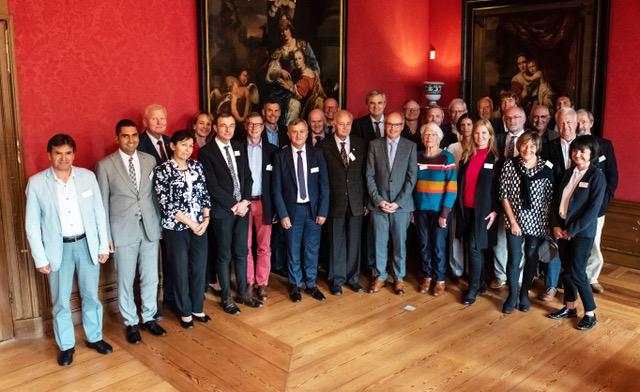 The participation of 22 ISC member organizations from 20 European countries was the highest ever attendance. In the programme of the meeting there was a roundtable discussion on academies role in contribution to the implementation of the UN sustainable development goals in the context of the ISC Science Action plan 2019‒2021.

Transdisciplinary research cooperation programmes  CROP (Comparative Research Programme on Poverty), LIRA 2030 (Leading Integrated Research for Agenda 2030 in Africa) and T2S (Transformations to Sustainability) were introduced. The next Annual Meeting of the ISC European Members will be organized in the Montenegrin Academy of Sciences and Arts in 10-11 September 2020. More information about ISC european memebers see on the website here: http://euro-isc.org/


The Swiss Academy of Sciences (SCNAT) is providing the Chair and the Secretariat of the European ISC Members until the end of 2021. The terms of office of the current management group members will end the same year. The European ISC Members are thus called upon to already now consider the possibility of serving as host organization beyond 2021 and/or to nominate representatives to the management group. Both matters will be on the agenda of the 2020 annual meeting. To meeting participants were also invited to give serious consideration to involve their MOs in the realisation of the ISC Action Plan by supporting specific activities or even taking the lead.
------------------------ 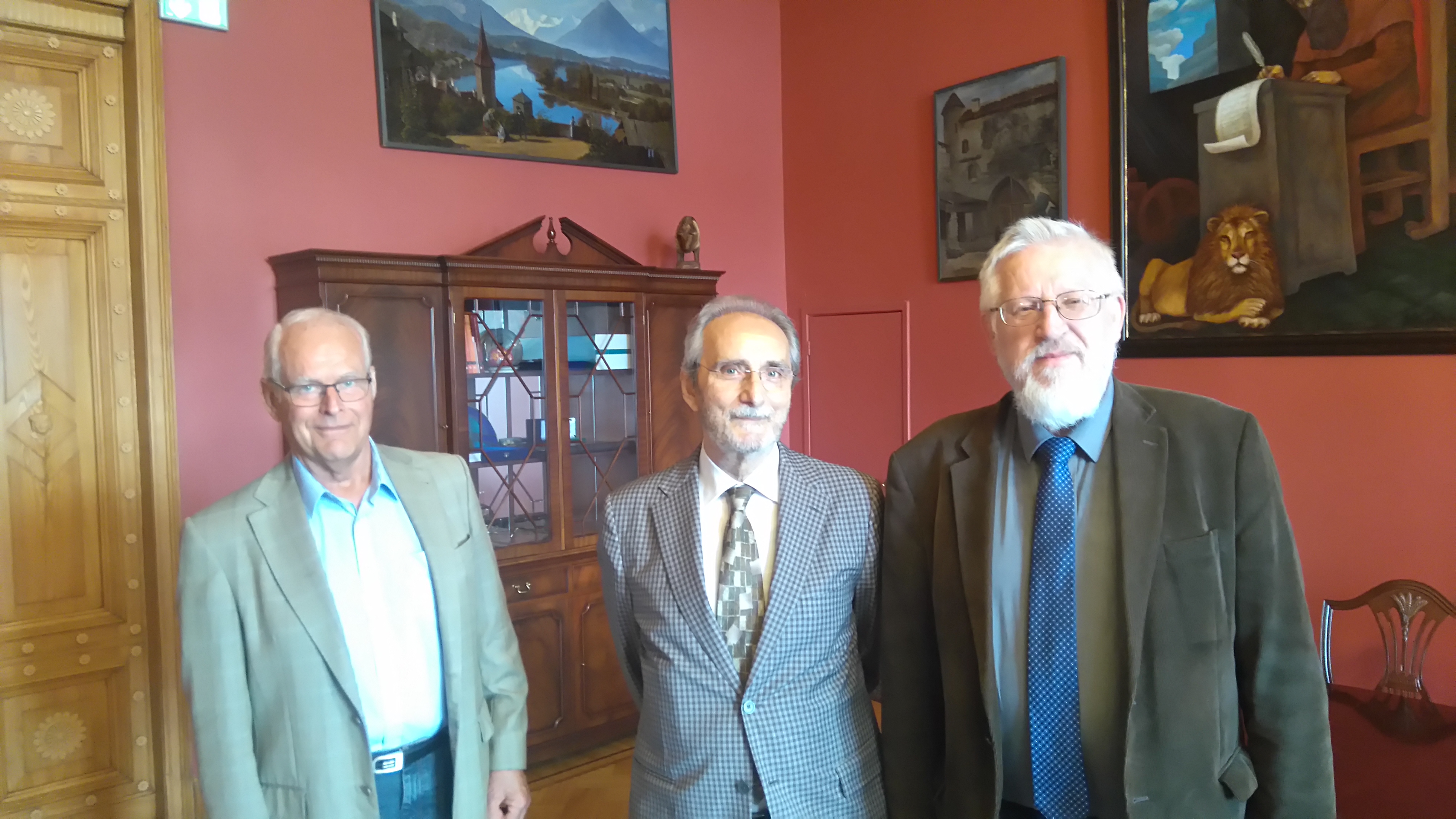 The presidents discussed the role of academies in society, science advice for government and cooperation possibilities in the
future. Professor emer. Rein Vaikmäe shared his experience with science advice to the minister of Education and Research in Estonia. Apulian Academy of Sciences is a personal academy, founded in 1925. More information on the website (in Italian) http://www.accademiascienze.uniba.it/
------------------------
Seminar: Engaging in research policy discussions
An event for early -career researchers from the Baltic region

19th June 2019, Estonian Academy of Sciences (Tallinn, Kohtu 6)
This event, organised by Wellcome Trust and the Estonian Academy of Sciences, will give early career researchers an opportunity to discuss research policy issues that interest and affect them, from a national, Baltic and European perspective. Attendees will have time to network and share their experiences, and will hear from research and science policy experts.

Seminar and training workshop: Towards bridging science and decision-making
While the production of new knowledge remains a corner stone of the academic landscape, a rapidly growing task of scientific community is providing advice to the local and national governments. This challenge calls for further elaboration of the options, best practices and mechanisms of advice in the contemporary society that is oversaturated by information.
To meet this challenge, the Estonian Academy of Sciences and the Foresight Centre, a think tank at the Riigikogu (the Parliament of Estonia), organise jointly a seminar and a training workshop Towards bridging science and decision-making in Tallinn on 31 January–02 February 2019 in the frame-work of the action Science meets Parliaments – Science meets Regions launched by the European Commission Joint Research Centre (JRC).

The intention is to provide theoretical framework, share experience from policy-makers and offer opportunity for hands-on training on how to convert science into advice for policy, and how to deal with such advice from a “science for policy” perspective. To do so, high-level politicians, experts in cognitive studies and communication, and top scientists engaged in various advice mechanisms are invited as lecturers; professional instructors in presentation skills are engaged as trainers.

Scientists, science administrators, policy-makers, government and city officers, experts from industry, and representatives of the public who are (or are willing to be) involved in various advisory efforts are equally welcome to this event from Estonia, Latvia, and Lithuania. The intention is to provide them with information about the functioning of science advice channels and training in the use of the proper means to convert science into policy advice.

Video records of the presentations 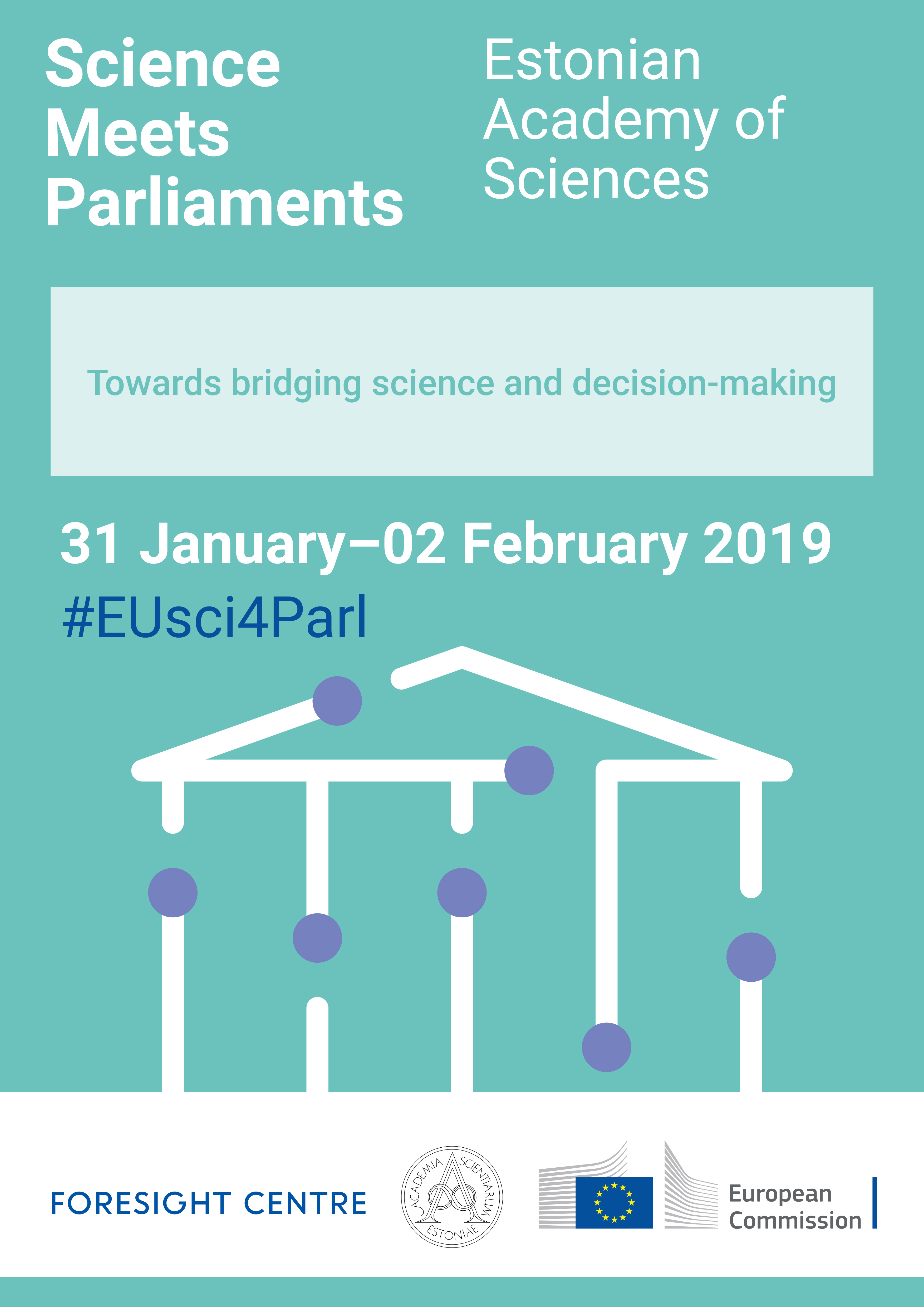 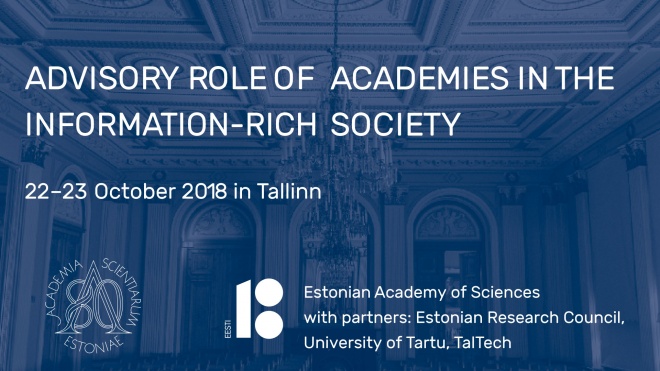 The conference marked the 80th anniversary of the Estonian Academy of Sciences as well as the centenary of the Republic of Estonia.

The message of science was presented, among others, by Prof Sierd Cloetingh and Prof Antonio Loprieno. Dr Katrien Maes communicated the position of research universities. The comments on how excellent science is converted into advice by high-level experts at the EC Science Advice Mechanism (SAM) Dr Johannes Klumpers and Prof Janusz Bujnicki were complemented by an insight into problems that are faced by academies in other parts of the world, presented by Prof Jorge Huete.The viewpoint of science advice recipients was exemplified by top level decision-makers, such as Dr Robert-Jan Smits and Prof Marju Lauristin.
Examples of best practice, provided by representatives of Estonian universities, ministries, etc., were followed by panel discussions.
For further details please refer to the programme.
------------------------

On 26-27 June 2018, the Academy hosted the 4th meeting of ESAF.
ESAF is an independent, informal assembly of European science-based strategic policy advisers, nominated by the EU Member States’ govern-ments. Estonia is represented by President of the Academy Tarmo Soomere.
The guest speaker at the first evening get-together was a former Vice President of the European Commission Siim Kallas. The second day programme comprised an invited talk by Member of the Academy Maarja Kruusmaa on the topic “IT technology and society in Estonia: the lessons learned and yet to come”. Also attending were representatives of the European Commission.
-----------------------

On 20 April 2018, the Annual Meeting and an accompanying conference "The History of Thought in Estonia" were held at the Estonian National Museum in Tartu to mark the very first General Assembly meeting of the newly founded Academy on 20 April 1938 in the University of Tartu Council Hall.

A  special maximum postcard  dedicated to that event, was issued by the Estonian national postal service.

A regional approach to an open and integrated electricity and gas market in the Baltic Sea region was discussed In light of the Baltic Energy Markets Interconnector Plan. Click here to see the programme and background information.
-----------------------

On 31 January 2018, the Academy started on a series of events marking the 80th anniversary of its founding with a festive meeting "Academy and Society" at the Estonian Parliament building and an official reception at the Academy House.
-----------------------

On 5 January 2018, young Estonian researchers from all over the world gathered at the Academy House for their second joint conference, this time under the title "Greatest Challenges in the 21st Century".

On 9-10 October 2017 the Academy hosted an international conference on the marine environment.The conference "From Small Scales to Large Scales" brought together environmental conservation and environmental awareness experts from three countries bordering the Gulf of Finland – Finland, Estonia and Russia.
For more details please refer to the schedule, program and abstracts.
The event has received funding from the Estonian Environmental Investment Centre.
-----------------------

On 24-26 May 2017, the Estonian Academy of Sciences hosted the EASAC Council meeting in Tallinn.

The European Academies' Science Advisory Council (EASAC) is formed by the national science academies of the EU Member States. It was founded in 2001. Through EASAC, the academies work together to provide independent, expert, evidence-based advice about the scientific aspects of public policy to those who make or influence policy within the European institutions.The Council is EASAC's full assembly and governing body. It meets every 6 months, usually at the Academy of the EU member state which is in line to take over the EU's Presidency six months later.
-----------------------